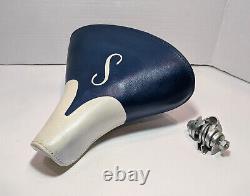 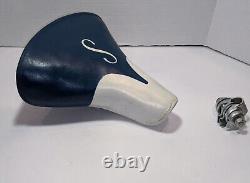 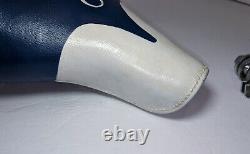 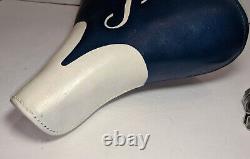 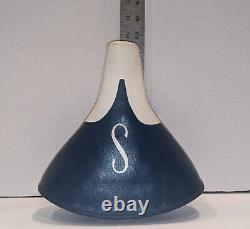 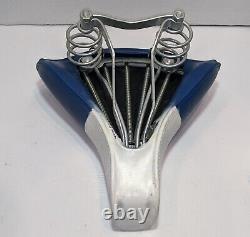 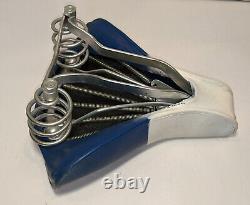 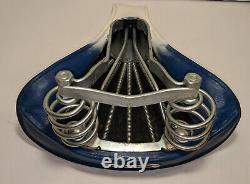 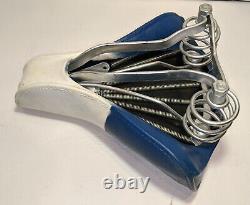 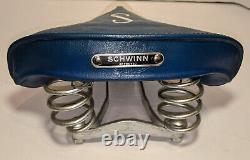 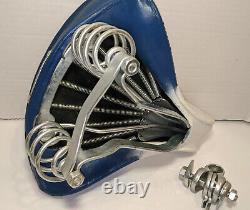 VINTAGE Schwinn "S" Seat, Two Tone Monogram Saddle, Mesinger RARE! Description: This is a Schwinn Approved "S" Seat, Two Tone Monogram Saddle, in blue & white. The "S" Seat first appeared in the Schwinn Catalog in 1959, and the seats remained on bicycles throughout the 1950's, 1960's, and 1970's. I picked this up at a collector's estate, and it was packed away in a plastic bag, with other assorted parts.

Physically, the saddle and it's hardware look "like new", as if this was never used, or attached to a bike. I just can't say for certain. Although, due to storage conditions, there are some faint signs of dirt, debris, and light discoloration on parts of the saddle.

Around the stitching & seams there are signs of dirt and fading or wear. And on the white portion of the seat, there are some areas of discoloration. I'm just trying to show off any imperfections, dirt, or signs of wear to you. Other than that, I did notice some dirt, dust, or possibly moisture damage on the black soft cushioning on the under/inside of the seat. There are some light marks or scratches on some pieces of the metal, but I didn't see any significant damage.

Again, for a bicycle saddle that's roughly 60+ years old, this is in incredible condition. I've taken several photos of this Schwinn Approved "S" Seat to show off it's condition, as well as what's included. Please look through the photos carefully and check it out for yourself. Item comes as-is, in photographed condition. This item is in the category "Collectibles\Transportation\Bicycles\Bicycle Parts". The seller is "gourmet_steak" and is located in this country: US. This item can be shipped to United States.